Slooze is a web-based photo album for the display of photos and other pictures on web sites in an organised, catalogued, searchable manner. 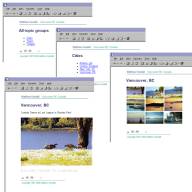 The software is simple enough for novices to set up and use, yet well-structured and extensible enough to support large and complex image archives via customisation.

Users of Slooze fall in to two categories. Web site builders implement Slooze on their site in order to make photo collections available on their site. Web browsers visit web sites that have implemented Slooze, in order to find and view photos.

These are the basic features provided by Slooze for visitors who browse the photo album:

The hierarchical catalogue organises photos into topics. Each topic may contain further topics, or photos, or a mixture of both. Topics may be nested to arbitrary depth.

The search function allows images to be located by searching the image metadata.

In the hierarchical catalogue and search results, images are presented as thumbnails. Each thumbnail is a hyperlink that leads to the corresponding full-size image.

The image display function displays a full-size individual image along with all the related metadata.

Users can add comments to pictures. An unlimited number of comments can be added to each picture, and all comments are shown along with the picture each time it is displayed.

These are the basic features provided by Slooze for builders of web sites:

Creation and deletion of images themselves (and manipulation of the files containing them on the server) is outside the scope of Slooze.

Slooze produces no direct HTML output. All output is returned as text strings. You may output the string directly, or may choose to process it further, perhaps by using it as part of a template-based page.

Slooze assumes no page design architecture (for example tables or frames), and produces the most general output possible.

Slooze is modular and hence is easily extended to include new types of image data.

Slooze does not handle photos directly; it only handles data describing the photos. Photos are kept in the file system.

The basic organisational storage unit for photos is the roll. This is because image files obtained by digitising conventional film are naturally organised into rolls. Image files obtained from digital cameras are often downloaded from the camera in a batch, forming a virtual roll. For many users it makes sense to preserve this organisation, especially if the photos presented using Slooze are obtained from an existing library.

A single roll may contain photos relating to more than one topic.

If the web site builder elects to store the data in text files rather than use an RDBMS then multi-user web-based admin is discouraged.

If the web site builder elects to store data using a RDBMS then full functionality is available, and the photo metadata can be freely updated via the web-based admin pages.

URLs used to access pages produced by Slooze are bookmarkable.

The required target platform for Slooze is: